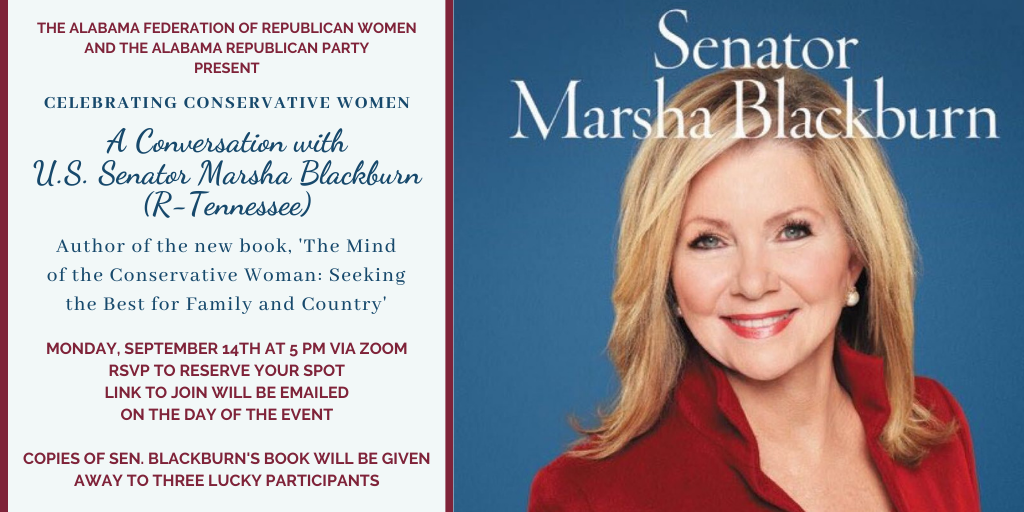 The ALGOP has partnered with the Alabama Federation of Republican Women to host U.S. Senator Marsha Blackburn (R-Tennessee) this Monday, September 14th at 5 p.m. This is a free Zoom event, but you must RSVP at the following link: https://secure.winred.com/algop/marsha-blackburn. The Zoom link will be sent out to all confirmed guests on Monday morning prior to the event.

Senator Blackburn is the author of a new book, ‘The Mind of a Conservative Woman: Seeking the Best for Family and Country’. In it, she challenges women to improve their place in life and open doors for themselves and the next generation through the courage of their convictions. Senator Blackburn expounds upon why beliefs labeled as “traditional” have common ground and can improve all of society, such as:

Senator Blackburn is the first woman ever elected to the United States Senate from Tennessee. Before ascending to that role, she represented Tennessee’s Seventh District in the United States Congress for sixteen years and served as a state senator for four years. She is known for her mastery of the political process, her fiery defense of her principles, and her wit. Senator Blackburn is a mother to two, a grandmother to two, and wife to her husband, Chuck, to whom she has been married for more than forty years.

I hope you’ll be able to join us for Celebrating Conservative Women – A Conversation with U.S. Senator Marsha Blackburn.

RSVP For ‘A Conversation with U.S. Senator Marsha Blackburn’
There are no upcoming events at this time.
View All Events